Are you making these mistakes when networking online? 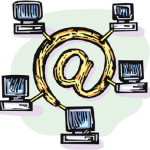 of saying, “you gotta network to get work”.

And as much as you may tell yourself that’s true, I wonder if you’re not actually treating your networking like flossing.

You know you NEED to do it and you SHOULD do it, but you don’t always get around to it and when you do you might not give it your all.

While we tend to think of networking as something that only happens at a conference or mixer, networking is something we do whenever we come into contact with other people.

Networking has a ton of benefits, but the biggest one is you can directly control the message you’re sending and help make sure people truly understand what you do.

That’s critical if you hope to generate more referrals.

Yes, you have a website, you speak, you write blog posts…but business is still a personal experience that’s built on an emotional connection.

And that’s really the heart of what networking involves.
And in today’s world, we don’t just network at events. We also do it online.

Online networking is something that’s still in its infancy (“social networking” is an incredibly young concept) but it’s apparent how we’ve embraced it when you consider that as of May 1, 2014 300 million people use LinkedIn, and Facebook hit 1 billion users way back in 2012.

Networking online may seem easy to do but it’s fraught with problems and can easily damage your reputation if you’re not careful.

Here are the top 5 mistakes people make when networking online so you can avoid them.

1. Traveling incognito. Unless you’re the Lone Ranger or Spiderman, people need to see who you are. Use a photo that’s appropriate to the forum. Professional pictures are a must on a site like LinkedIn. You don’t have to pay a pro for a headshot (although it helps) but be sure your image communicates that you’re a competent professional. Leave the party pictures for Facebook. On second thought…eliminate them from there too since people are checking you out and looking at your overall web presence.

2. Making seeming random connections. Several people have named this as a mistake specifically on LinkedIn – sending someone a connection request without explaining why you want to connect with them or reminding them how you met. One person equated it with trying to kiss a stranger. We’d all like to think we’re memorable but keep in mind the other person has met a zillion other people the same week and therefore you’re one of a crowd. Remind them where you met, or mention that you have mutual friends and you’d like to learn more about them. Dan Muchnok, COO of Opticom Consulting is probably speaking for lots of others when he says a request from an unknown person – especially one with 500+ connections – feels like spam. LinkedIn is much more personal than Facebook in many ways so take the time to personalize the connection request and don’t take it personally if someone doesn’t want to connect with you there. I’m more open on Facebook than I am on LinkedIn but if you explain where and how we met and why LinkedIn is where you’d like to connect I’m likely to accept.

3. Becoming one of “those” people.” Val Neighbors, an elder care advocate and business coach for home healthcare providers, andW endy Terwelp, the Networking Coach, both expressed revulsion at the tendency for some new connections to go into sales mode way too quickly. As tempting as it is to start sharing your fabulous offering or to ask that expert you just got connected to for a referral, please resist the temptation. It comes across as desperate. You have to take steps to raise your KLT-Q – your Know-Like-Trust Quotient – first.

4. Not being active in the platform(s) you register with. Networking is not a fast solution to growing a business. It’s like farming. You plant seeds…fertilize them…water them….care for them…and then you harvest the bounty once they grow. Not being active on a platform conveys you’re not really interested in relationship building, but instead are just out to promote yourself. That completely flies in the face of the concept of networking.

5. Relying on social networks as your online home. The popular blog, Copyblogger, posted an article decrying “digital sharecropping”  and the danger of “building your business on someone else’s land”. We entrepreneurs are famous for bootstrapping our way to success but as soon as possible you’ve got to build your online headquarters as the hub of your web presence. You can’t let Facebook, LinkedIn, or any other site control your online identity. You can start a site for as little as $100. It’ll be basic, but it’s yours. Get a custom site done as soon as you can. It’s money well spent and critical to your business development efforts because it’s marketing – and networking — for you all day, every day.

Online Networking is becoming an increasingly more important way to build your reputation as an expert and attract referral partners as well as potential clients. The challenge is in presenting yourself effectively and clearly distinguishing yourself from the rest of the others in your professional category.

Be careful to stay current with the best practices in this area and be sure to balance relationship building with selling.