In today’s gospel reading includes a well-known example of faith:  the woman who had suffered from hemorrhages for years who was healed after touching Jesus’ cloak.

He turns to her and says “Take heart, daughter; your faith has made you well.” 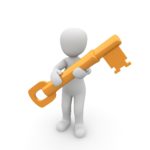 I think this is a great example of the 7 keys to achieving your goals.