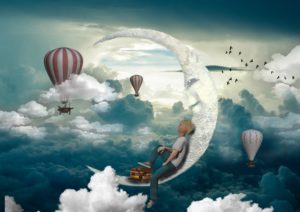 All his life, George made sacrifices while dreaming of a future full of exciting places and big adventures.

He dreamed of creating big buildings and traveling to exotic locations.

As he dreamed, he lived a life of service and sacrifice; preparing and waiting for his dreams to come true.

George had been dreaming of the day he’d escape the tiny town he lived in and had saved a lot of money. He looked forward to spending some of that on his honeymoon with Mary, the love of his life.

Unfortunately for him he got married on the day there was a financial crisis that caused a run on the bank and on the savings bank he ran.

His money went to keep his business afloat.

He worked hard to serve his clients and to be a good member of his community. But he often resented the sacrifices he made and wished business wasn’t so hard.

He once had a big juicy carrot dangled in front of him in the form of a job working for Mr. Potter…the richest man in town who owned everything but the business George and his family had built.

Boy it was tempting to take that carrot.

Enough money to live comfortably for the first time in his life. To be able to give his family the sort of things he wanted them to have and to live in a nicer home.

But he realized for just a moment that if he bent his values and lost control, his customers would have no choice but to turn to the spider-like Mr. Potter whose primary mission in life was control and profit.

So he turned Mr. Potter down and went back to work with his ethics in tact but his bank account still low.

George carried his uncle in his business until one day when the absent-minded uncle made a huge financial mistake on the worst of all possible days to make one – when the auditors showed up.

George believed he was ruined.

He had scrimped and saved and sacrificed…for what? To be arrested for embezzlement and to go to prison when he had done nothing wrong? To have his family shamed?

But George could see no way out of his problem.

Standing on the bridge in the middle of a blizzard, George believed he’d be worth more dead than alive. And as he looked at the freezing, black water below he believed he and everyone else would have been better off had he never been born.

You know the rest of the story.

Clarence, George’s guardian angel, gave George the amazing gift of seeing what the world would have truly been like had George never been born.

George saw what would have happened had he not been around to save people like Mr. Gower, the pharmacist driven by his own broken heart to fill a prescription with poison; Harry, George’s brother who George pulled from the freezing lake when the ice broke and who went on to save thousands of men in the war; his Uncle Billy who couldn’t run the family business on his own and went insane when it failed; the hundreds of depositors who were unable to afford homes or grow their businesses because George wasn’t around to help them. And the community that wasn’t able to grow and become a desirable place to live because George’s impact wasn’t able to ripple out to touch even those who didn’t know him.

Instead negativity rippled out because George wasn’t there.

YOU’RE George Bailey to hundreds, if not thousands, of people.

Your message and your solutions ripple out as people embrace them and apply the information you share, benefit from the skills you teach and use the advice you share.

But each time you choose to play small…to hold yourself back….to not put out a piece of content or share your message…you keep others from benefiting and from living up to their full potential.

The secret to attracting more clients is to put yourself out there more. It’s to demonstrate – to pre-sell – your knowledge, skills, and expertise in a way that resonates with those you’re meant to serve. And that gives them a clear idea of what it would be like to work with you.

I know that can be scary.

You run the risk of rejection.

Marketing isn’t about us, the entrepreneur. It’s about the person we’re meant to help. It’s a way to communicate valuable information that educates and inspires.

Those of us who hate selling need to remember that selling isn’t about getting or convincing. It’s about giving.

And that means we receive when the person we serve gives back to us in the form of compensation. It’s simply and exchange of value.

We give free information as an introduction and for those who are ready for the changes we help them make, that deeper help has a higher value.

There’s no shame in charging the prices you charge. You deserve to be well compensated so you can do even more good in the world.

So when you resist putting yourself out there…you don’t use video….you don’t update your blog….you don’t create courses and books…you don’t have a podcast or live stream show…and don’t appear as a guest on others shows…and give in to let your ego and pride take over to keep you safe by convincing you that no one wants to hear what you have to say or that they’ve heard it all before….

You’re keeping someone from doing, being, or having all they could.

You’re keeping someone from healing…from learning…from improving…from experiencing the abundance waiting for them. From improving their environment.

No one said this would be easy.

The entrepreneurial life is full of sacrifice and tough choices. But it’s also full of rewards that come from giving our best in service to others.

Each of us is the star of the movie that is our life. But we’re also playing a part in the lives of others.

But if you refuse the role you could play, it’s harder if not impossible for that person to be, do, or have all they could if you only stood up and put yourself out there.

The choice is yours. 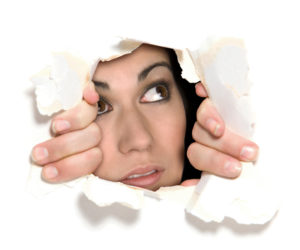 You can stay hidden and protect your ego; or you can come out of hiding and get your message out in a bigger, bolder way and help others as you help yourself and contribute to creating a better world for everyone. Because it really is a wonderful life when you fulfill your potential and help others fulfill theirs.